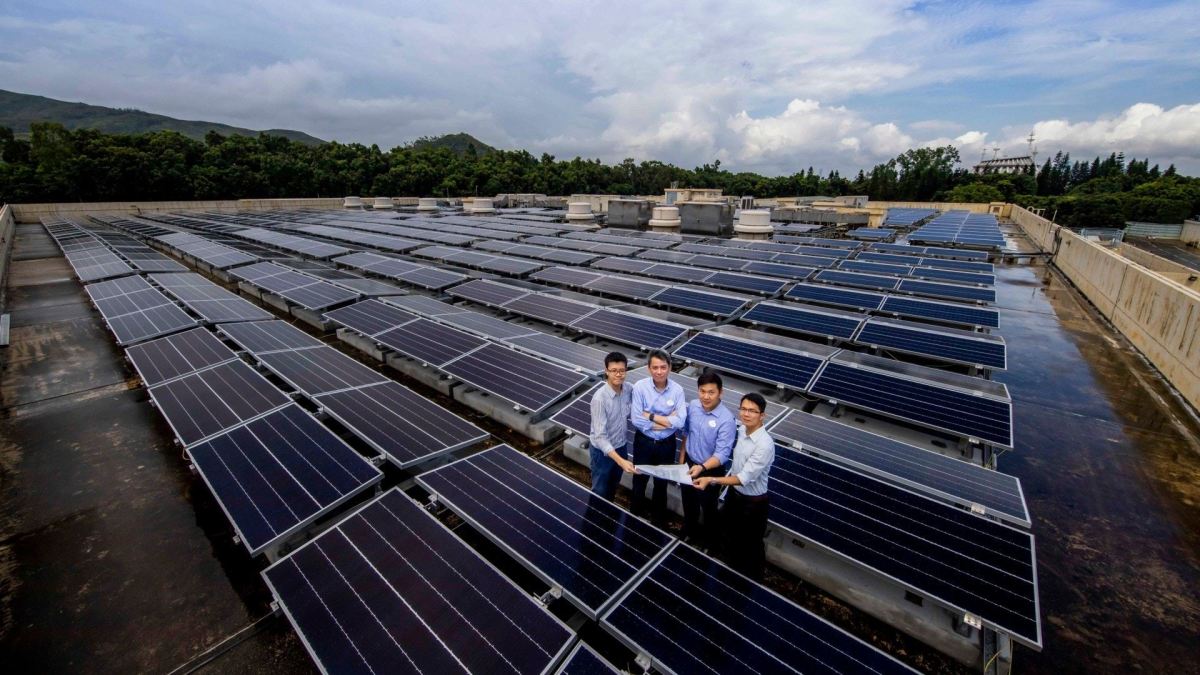 One of the primary deterrents to the intensification of agriculture has long been its requirement of insolation, exposure to the sun’s rays. Land put to agricultural use could not be simultaneously devoted to any kind of vertical development, because of the dependence of photosynthesis – the Earth’s most abundant chemical reaction – on sunlight.

Another sector faces the same problem: solar energy. Devotion of land area is a major concern. Although unlike plants, solar panels evolve relatively quickly to become more efficient, it does not seem likely that the progress rate will be fast enough to realize a sea-change within our generation’s lifetime. Provision of an unobstructed surface to intercept the sunlight is the primary consideration when harnessing solar energy.

However, combining the two – agriculture and solar energy – is not a bad idea, as recent research has shown.

Aeroponics, the vertical stacking of small plants on racks equipped with root drip sprayers, to save water and land use, is already exploiting the ability of several plant species, particularly vegetables, to thrive under shade or indirect and spare illumination. Initially, the cool shade provided by solar panels was deemed to be appropriate only for fungiculture. Shade is conducive to various kinds of plants, and studies are still ongoing. It’s a precarious territory and some varieties don’t even struggle to cope with shade – it is actually an advantage for them, facilitating higher carbon-dioxide uptake.
A research study led by the University of Arizona’s Greg Barron-Gafford, published in the journal Nature Sustainability in September last year, found that shading by photovoltaic panels provided multiple additive and synergistic benefits. These included, among others, greater food production, a reduction in the plants’ drought stress, and a drop in solar-panel heat stress.

The shade provided by the solar panels lowers soil surface temperature and evaporation, and the vegetation reciprocates by keeping the panels cool. Photovoltaic (PV) panels begin to wane in efficiency at high temperatures, hence the presence of vegetation is conducive to their energy yield.

Coverage by the panels not only provides cooling during daytime but helps retain considerable heat during the night. Of the three types of plants experimented on, two showed a high increase in carbon-dioxide uptake as well as an immense rise in food production. Meanwhile, the third plant showed marginal decreases in both, but nonetheless considerably improved its water-intake efficiency.

This implies that extensive trials to probe which crop plants prefer shade, or a meticulous investigation into the underlying mechanisms affording the changes, is appropriate to implement the scheme fruitfully. However, overall, the results were extremely promising.

Agrivoltaic installations in arid and semi-arid regions have the potential to check desertification. Plants not only serve to cool and retain moisture but also act as a shield against soil erosion and airborne dust, the latter of which poses a serious detriment to the efficiency of solar panels. Moreover, the panels would also hinder wind erosion and by breaking the flow of precipitation, water erosion as well.

In fact, agrivoltaics may help recover certain tracts of land that were rendered unfit for cultivation. Rooftop agrivoltaics can also help urban infrastructure become sustainable, and households and homesteads to negate their carbon and energy footprint conveniently.

In tropical areas, the benefits are three-pronged: high insolation would lead to higher energy yields, further boosted by the overheating the plants prevent, a great diversity of plants can be grown, and the entire setup by simple virtue of its roof coverage would afford heat-shielding in summer. In arid areas, the entire setup could be integrated with a rainwater-harvesting system, and the roof cover would offer significant temperature moderation – cooler days and warmer nights.

The best part is that such installations can be automated – it is more of a one-time investment. An IoT-enabled network comprising sensors and simple robotic actuators such as temperature and moisture sensors, simple repetitive panel cleaners, and timed watering mechanisms could render the installations near-completely independent of human intervention, even for household units.

For large installations, agribusiness or otherwise, machine learning could enable extensive automation, adaptive optimization and yield maximization – say by tilting and turning the panels to tune in to the motion of the sun or reconcile or readjust the plants’ and the panels’ needs according to the immediate requirement. Constant monitoring and foresighted planning could enable the achievement of both short-term and long-term goals.

Agrivoltaics might just be the redemptive cooperation that can salvage humanity from the ill-advised pursuit of indiscriminate competition. This adaptable, integral solution has the potential not only to make economic pursuits sustainable in general but also to help achieve individual self-sufficiency and energy independence.