Co-Founder and CEO, Kathy Miller, stands beneath a solar panel tree at Yes Solar Solutions in Cary, NC on May 14, 2019.

When women get a foot in the door at solar companies, they succeed in multiple roles despite often lacking engineering and construction experience.

As happens with so many college students, a single course inspired Mary-Margaret Hertz to choose her career.

“I took an energy in the environment class, and it kind of clicked for me,” she said. “I knew I wanted to do renewable energy.”

After graduating in 2016 from North Carolina State University in Raleigh, Hertz first worked as a bartender before she began to pursue her passion, applying to as many jobs as she could find in the state’s solar industry.

“No one wanted to hire me, because I didn’t have construction experience. Not that getting a job right out of college is easy for anyone,” she said, “but particularly in this industry, it was a little bit limiting if you couldn’t get on a roof right away.”

She finally broke through at Yes Solar Solutions, working her way up from part-time administrative intern to full-time projects coordinator. Today, she’s among the quarter of the state’s clean energy workforce comprised of women. 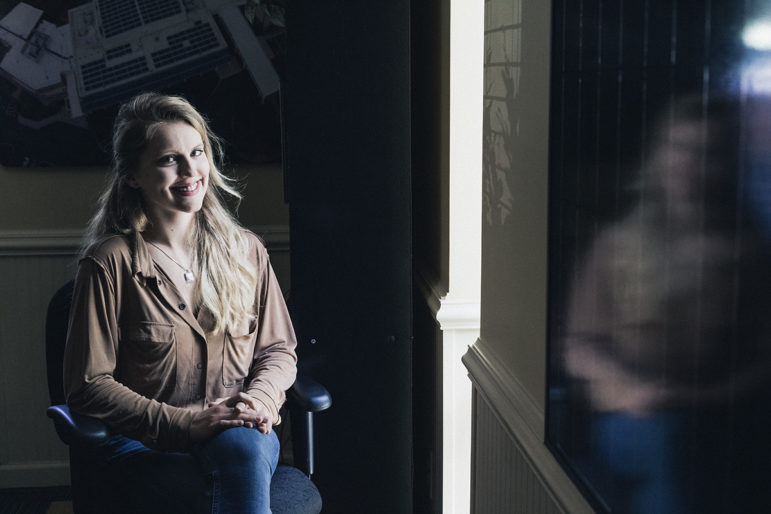 Of course, there’s no typical woman working in solar energy. But conversations with Hertz and others in the state’s industry paint a rough portrait: She’s white. She’s successful without a background in engineering or construction, in part because of a willingness to fill gaps. She’s outnumbered by men, but may have advantages compared to her counterparts in traditional energy sectors.

Above all, she’s committed to the mission of sustainable energy, and hopeful about the future of her field. Hertz ultimately wants to find work bringing solar to energy-poor areas in other parts of the globe. But for now, she said, “I love being here and I like what I’m working toward.”

Getting a foot in the door

Men make up about three-fourths of North Carolina’s clean energy workforce, according to an annual survey by the North Carolina Sustainable Energy Association. One likely reason: Women are underrepresented in engineering and construction, two areas critical to most renewable energy companies.

According to a report from the 2014-2015 academic year, women made up just a fifth of students earning bachelor’s degrees in engineering from the state’s public universities. More than two-thirds came from N.C. State, but even there, women were outnumbered 3 to 1.

At half of the schools offering engineering degrees, only a handful of women were in the graduating class. They include Appalachian State University in Boone, where Yes Solar finds many new hires, said the company’s CEO, Kathy Miller. To fill her installer positions, she looks for applicants with relevant degrees.

“For every 20 resumes I get from men at App State,” Miller said, “I’ll get one from a woman — maybe.”
Miller values candidates with construction or electrical experience, but women who fit that profile are even rarer. In 2016, according to a recent report from the North Carolina Department of Administration, less than 1% of working women did so in “natural resources, construction, or maintenance.” They made up just over 4% of workers in the field overall.

“We’ve had one female installer and she was really good,” Miller said. But, she added, “it’s just harder to find women on the construction end.”

With so few women on the company’s installation side, Yes Solar has participated in apprenticeships and created internships to help diversify its workforce. That’s how Hertz got her foot in the door, starting at 20 hours a week.

‘What needs to be done’

North Carolina native Rhiannon Giddens recently described hoping to learn the fiddle from a local legend in string music but playing the banjo with him instead; that was his usual accompaniment. She told the New Yorker, “that’s what we ladies do — what needs to be done.”

The same might be said of women in North Carolina’s solar industry.

Jessica Jenkins had been teaching calculus in Boone until three years ago, when a friend, the founder of Carolina Solar Services in Durham, reached out to her. “They were at the point where they could really use some operational help,” Jenkins said, describing the conversation. Today she’s a vice president at the company of 50, overseeing all of its internal affairs.

Carrie Stewart graduated college in 2009. Two years ago, she switched careers to join her husband and brother at Green State Power. She’s the only woman in a company of 10 employees.

“I had a huge learning curve,” she said, “I didn’t have an engineering background. I had a banking background. But in a small business, you wear every hat. So, I’m in sales? Yes. I’m in accounting? Yes,” she said, ticking off even more roles. “You just have to be willing to take it all on.”

With a degree in business, Stewart recognizes the need for cohesion among employees. After several new workers joined the company at once, she decided a team-building activity was in order. “You need a woman there to put these events together,” she quipped.

But her company’s sustainability mission is a major motivating factor for Stewart. “I really do believe in the future of clean energy,” she said. “You can see the path forward. You know that you’re having a positive impact, even when dealing with the minutia.” 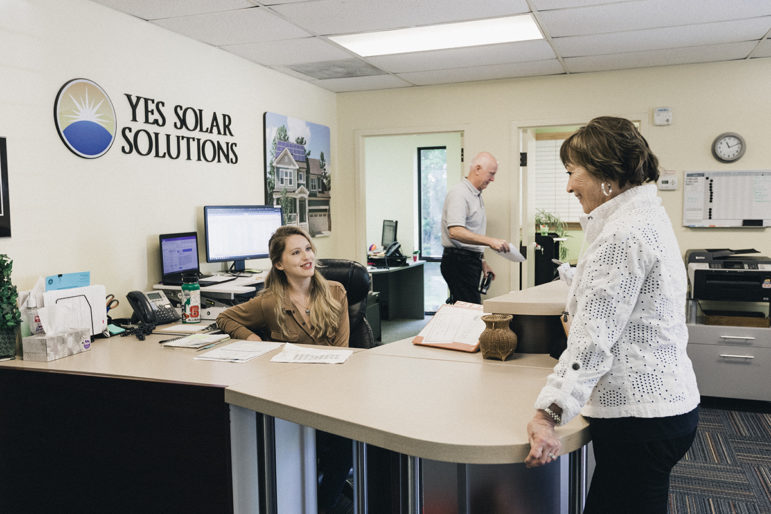 Stewart drove some 70 miles from Greensboro this spring to attend a happy hour in Raleigh packed with her peers in the industry. The event was part of the Sustainable Energy Association’s ongoing project to foster connections among women in the clean energy workforce. As Hertz put it, “you feel so alone sometimes!”

Lonely though they may be, none of the women said they experienced discrimination or harassment in the workplace. Perhaps, some theorized, the industry is so young and pioneered by so many women, that a patriarchy hasn’t had time to calcify, especially compared to traditional energy fields.

Catherine Ambrose earned a degree in electrical engineering from N.C. State, and now works as a performance engineer at Carolina Solar Services with a team of men. She had only praise for her coworkers and work environment, but compared that to a previous internship at Duke Energy.

“The people I worked with [day-to-day] were great,” she said. “But you would meet people in different parts of the company, and they would say things that would rub you the wrong way. You could tell they were not used to having women in the workplace.”

Miller said the company’s one-time female installer likely had a better experience at Yes Solar than she would have had elsewhere. “She held her own with the guys,” she said. “But there are a lot of construction companies that just wouldn’t have hired her. She was young and attractive and smart.”

The cutting-edge and partially mission-driven nature of the industry may also mean the white men who dominate it value different life experiences.

“Our industry is new and it’s also very progressive,” Jenkins said. “You have progressive-minded people, not necessarily in a politics way, but in understanding the importance of all types of diversity.” 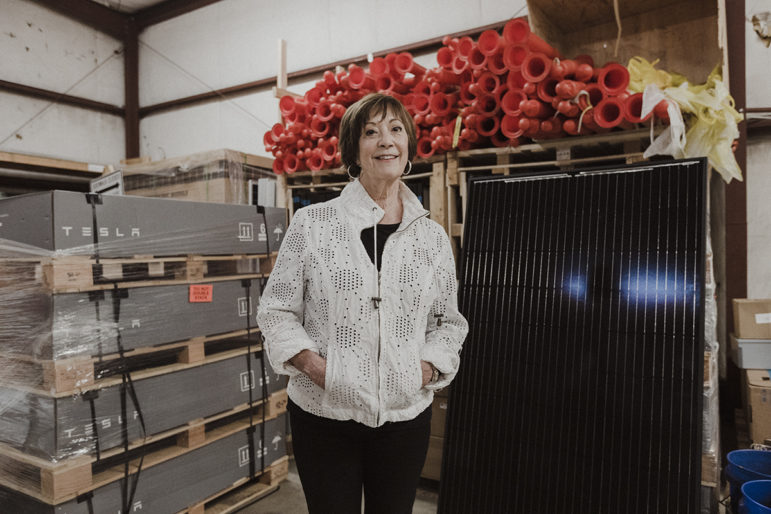 Not in a societal vacuum

Still, there’s no guarantee the clean energy industry is devoid of harassment and discrimination. Women and people of color may be less likely to report problems, for fear of jeopardizing their company’s cause. And in other workplaces with far less profit motive — from religious institutions to political offices — there has been plenty of abuse.

The clean energy industry also doesn’t operate in a societal vacuum. Hertz, one of three women in an office of 22, called all her coworkers “fantastic,” but said sometimes angry customers on the phone could only be consoled by her male counterparts.

“I’ll have to hand it off and they’re able to assuage the situation, bring it down a little bit,” she said. The other women at Yes Solar, “they laugh it off a little better than I do. But it makes me extremely angry,” she admitted.

The planners Hertz interacts with are almost all men. With them, she said, “I really have to prove I know what I’m talking about because they don’t expect you to have technical knowledge — ever.”

Hopefully, such bias won’t hold back the upcoming generation of women in the industry, said Jordan Jones, engagement and equity specialist at the Sustainable Energy Association. They’re increasingly concerned about the environment and conservation, she said, and they’re also more likely to reject gender norms.

The driving force behind the Raleigh happy hour and others around the state, Jones wants to expand the project to include more formal conferences as well as mentorships especially for women of color.

No matter how they enter the clean energy workforce, Jones and others believe women will continue to gravitate to and thrive in it because they believe in its mission.

“I think that’s going to work in women’s favor,” Miller said. “They’re just more passionate about the nobility of the industry.”