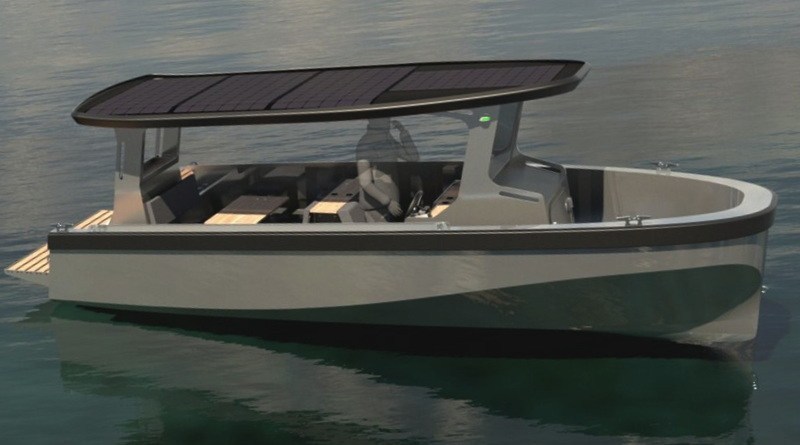 The latest electric boat project to pursue the crowdfunding path is the 6.2 metre (21 ft) Norwegian solar boat Freepower from the Bjurtech company. The campaign is hosted on Finnish site Bidra with a goal of 780,000 Norwegian Krona – about $75,000 US.

Created by Martin Bjurmalm and Pivot Product Design, the Freepower features a 9 or 18kWh battery pack charged from shore power that can be augmented with electricity from a 1kW solar module on the boat’s hardtop roof.

Crowdfunding has been proven to be a good route for many new products, and other electric boat companies have had good success with the tactic.

The boat is called the Freepower because the goal is to create an autonomous boat with the “freedom to go whenever and wherever without fuel stops, with freedom to harvest the energy around us!”

Oddly enough (or maybe aptly enough), Bjurmalm first started thinking about Freepower when he was working in the oil and gas industry in Norway. When he became a father in 2012 his thoughts turned to what kind of world we want to leave for our children, and he knew it shouldn’t and couldn’t involve burning fossil fuel. 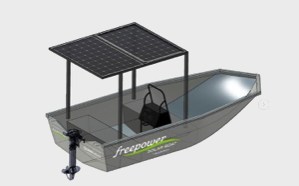 He created and tested a working solar boat over the past 2 years, and Freepower is the next iteration of that project. Constructed of recyled aluminum, Freepower is 6.2 m (21′) long and weighs 700 kg, including the hardtop canopy and solar panels. She has a 3kW electric outboard engine and batteries from ePropulsion with a 9kWh integrated battery providing about 3 hours and 30 km of range at full speed of (7 knots) and about 6 hours and 60 km at the 5.5 knot cruising speed. A twin battery option can double the range.

The motor, of course can be charged by shore power, but to achieve the goal of total autonomy, Freeport has an Ecobalance mode and system control app. 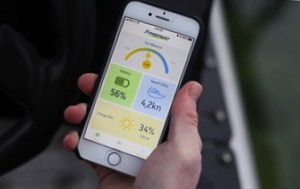 Every part of the vessel’s system, from solar panel down to propeller pitch, has been chosen to minimize energy use, to such a degree that when driving in Ecobalance mode, the battery is still charging from the solar panels. even as the motor is using the electricity to move. The Ecoblance app lets you monitor battery status as it receives information about incoming charging power from solar panels and consumed power to the motor.

Bjurmalm says you can run all day as long as the sun is up, even in Norway’s low angle light. If you are interested in finding out about the Freepower Norwegian solar boat, check the Bjurtech website and crowdfunding campaign.