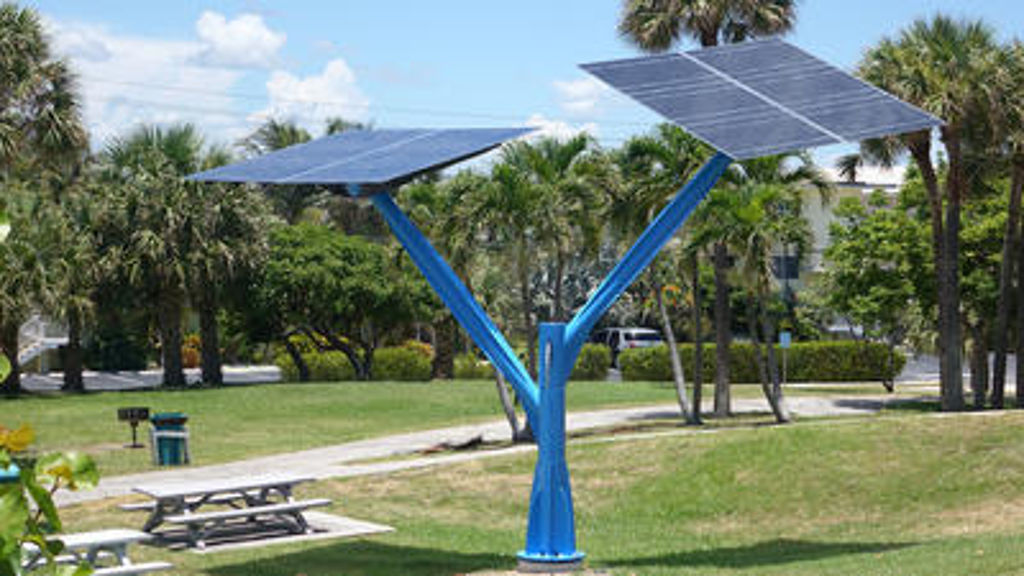 Florida Power & Light is planting large devices across Florida that look like trees and harness the power of the sun to create electricity.The utility has begun installing these 24-foot-tall, solar-powered “trees” to bring attention to the use of solar energy.

Boynton Beach in recent weeks installed two of them at Oceanfront Park, 6415 N. Ocean Blvd., becoming the first city in Palm Beach County to offer the solar installation as a public amenity.

FPL’s pilot program, called SolarNow, kicked off two years ago, allowing customers across the state to opt into a $9 extra charge on their monthly bill to fund public solar-power generation.

More than 450 Boynton customers opted into the program.

Tall, bright blue and Y-shaped, Boynton’s solar trees have USB ports and outlets where parkgoers may plug in to charge their cellphones.

The presence of the solar trees gives the public a chance to learn more about the technology, said FPL spokeswoman Alys Daly. “The great thing about these solar trees is that we’re locating them in communities where people have an opportunity to see and learn about solar,” Daly said. “Many people haven’t experienced solar because it’s out of sight on a rooftop somewhere, but you can’t miss [the trees].”

In Boynton, FPL soon will put the finishing touch on the new trees in the park: educational boards that explain how light goes into the panel and is converted into energy, she said.

“They are a tremendous educational tool for folks to see what solar energy looks like and interact with in a way that they haven’t been able to before,” she said.

FPL also will pay the city about $4,000 per year to lease the land used for the solar structures.

Other South Florida cities are joining in on the effort to promote solar energy. On Tuesday, the Pompano Beach City Commission gave initial approval to add solar trees and canopies in five locations, including the parking lots of City Hall, the Cultural Center and a fire station. The city also may upgrade the canopies to electric car charging stations.

Last year, FPL installed solar canopies at the Young at Art Museum in Davie and the Palm Beach Zoo in West Palm Beach.

One of the solar trees in Oceanfront Park stands tall over the Turtle Cafe, where Solange Arias works.

The 34-year-old said she is excited about the solar trees and the opportunity they offer to promote solar power.

“I hope more and more people start to use them and they’re able to install even more of them,” she said. “And as an added bonus, they just look so pretty.”